I'm going to go out on a limb here, and even if it is tooting my own horn, tell you that I have a pretty awesome deck. I mean, as far as decks are concerned, on a scale of 1 to 10, I'm quite certain that my deck is solidly a 6.5 or better.

It's a deck that evolved from three distinct phases of construction, the first beginning even before there was a door out of the back of the house to access it. And because any momentous undertaking takes time and care to complete, to the highest of standards, the deck firmly lag-bolted to the back of our house has taken three years to complete. With each of those years matching those distinct phases of construction that I had mentioned earlier. Which probably has more to do with my limited time, and meager carpentry skills, than it has to do with the building of the deck, but by now I'm sure you're all aware of my ineptitude, so I'm not really going to travel down that road, for this story.

Anyways, aside from a few cosmetic things left to do, last year I reached the point in construction where I stepped back, scratched my backside and thought, I think I might finally be done with this? Which is a rather satisfying feeling to let absorb, while sitting out there in the mornings, drinking my coffee, or relaxing with a beer at the end of the day. And even though it did take me three years, I could revel in the grandeur of my awesome deck and the knowledge that I had actually set out to do this thing, and follow it through to the end. I. Was. Done! 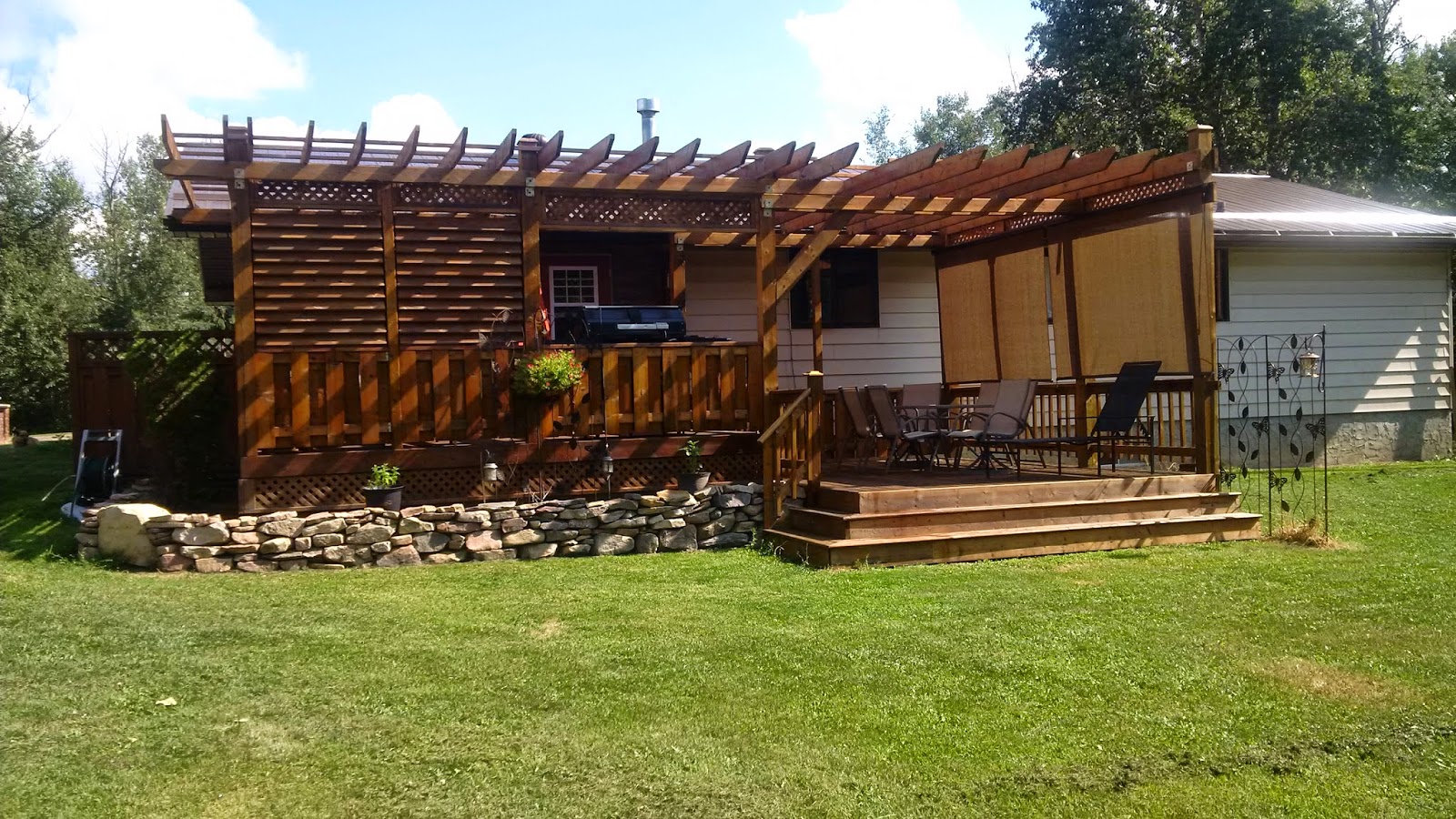 Then my wife said that we really should stain this thing before it rots off the back of the house, forcing me to start building it all over again.

So it was decided, sometime in the dead of the winter, when I could only look out into the icy bleakness, through the window in the back door, and dream about the snow melting, and being able to return to my deckly awesomeness, that before we would put out any of the patio furniture, or even entertain any thoughts of entertaining guests out there, we would stain that deck.Which, of course took us most of the summer to complete, and left me covered in a pleasant artificial tan-like amber hue, but  unfortunately, made it almost impossible to shower because the water just wanted to bead up and run off my skin.

Nonetheless, now in the fourth year, since we began the construction of the deck, the staining was finished, the patio furniture was out, and the weather turned magnificent, as my City Cousin arrived with his family for the week. We spent many hours enjoying our deck, and I made sure that I lit all of the things that burned, cranked all of the things that crank, tilted all of the things that tilt, and used our phenomenal BBQ as much as we could.  We shared laughs, some drinks, and a few cigars on our deck, and the time flew by, until my City Cousin and his family left, and my family and I packed up our things into our trailer, and left on our holidays as well.

Westward, we headed. For ten hours, until we finally arrived at the newly acquired cabin of my wife's sister and her husband. Which just happens to be on a grand lake. And we spent time with them and enjoyed drinks and good times, on their deck, less than 50 steps from the lake. When it was too hot, we cooled ourselves in that grand lake, or took lazy evening boat rides. Over morning coffee, I watched the ospreys catch fish and fly wonkily back to their nests with a struggling breakfast in their talons. In the evening, we sat as the bats flew all around us, cleaning up the mosquito's. And I may have just spent a little too much time that one afternoon watching the nudists, anchored across the lake in their pontoon boat, through my spotters scope.

And then, as quickly as it all began, we were back home to the hustle and bustle, and to our own deck in our own backyard.

Yesterday, as I was back standing on my deck, the deck that has now been a labour of not less than four years, I came to the realization that our deck is missing a key component. A mysterious ingredient that transforms any average deck into an oasis of solitude. That one thing that can take everything that is stressful about life, and make it all disappear, while you enjoy those stolen moments, hidden away on your deck.

I need a lake!

I think I'll start construction next spring, right after I finish my seeding.

However, I'm pretty sure that there's a pig barn and possibly an old combine buried in my backyard, so that could pose a problem.

Posted by Ken at 8:31 am 26 comments: Links to this post
Email ThisBlogThis!Share to TwitterShare to FacebookShare to Pinterest
Newer Posts Older Posts Home
Subscribe to: Posts (Atom)