It's relatively cold here today. -13 degrees Celsius  but the wind chill is making it feel like it's in the mid,  -20's. (-25 Celsius is about -4 Fahrenheit.) There's also a heavy snowfall warning, that we may get close to a foot of snow. So, it's safe to assume, that we are in fact, in the grips of winter now.

It's been pretty much a given, that this was coming. While a lot of people spent the remaining bit of warmth we had, stringing up Christmas lights, I've been racing around the last week, trying to get some last minute things done, before it got too cold to work effectively outdoors without my mittens on.

I was trying to prepare a pen to wean my calves into. The problem was, that when our barn burned, it shorted out the power line, to that pens watering bowl. (you can read about that here) The overhead line had to be replaced. Without this, the waterer was just a block of ice, and useless. I needed this pen, because I have a double fence that can separates the calves from the cows in that pen, and it stops the cows from breaking into the calf pen.

Ideally, it would have been a lot easier to replace the power line in the comfortable warmth of the summer. But in a grand feat of procrastination, I left repairing the overhead line until it was cold enough outside for it to be a particularly miserable job. A job, that required me to pull up to each power pole with the bucket of my tractor raised as far in the air as it would reach, then climb a ladder into that bucket, and then climb a second ladder, fastened in the bucket, just to reach where the line attached to the pole. I also used this method to repair a bunch of yard lights that were not working properly.

It was a bit pain, because besides only being able to work at the top of the pole for a few minutes before my fingers froze to the point that they stopped working properly, it was also freaking high! Usually, by the time I lost feeling in my thumbs, and fingers, my legs had started to vibrate on their own accord, because they had lost faith in my one good arm,  to actually grab something and save my life, in the unfortunate event that I fell.

But I got everything going and the watering bowl thawed, and I weaned my calves. I also separated the bulls from the cows. Usually, I leave the bulls with the cows, but that's not the best plan. They tend to bother the cows a bit. That's because bulls generally think of only two things. Sex and fighting. Sometimes it's fighting and sex, but usually, it's sex and fighting. That's why it's difficult to keep bulls penned up. Putting a bunch of bulls in a pen is more a suggestion of containment, than actual confinement. Inevitably, they will start to think about sex, break out in a fight, and  tear out a section of the corral.

When one bull, weighing a ton and a quarter, catches another ton and a quarter bull broadside, and starts pushing him in the direction of the fence, the fence usually loses. This happened one time when I was helping a neighbour sort cattle. One bull T-boned another and were headed in my direction. I climbed the closest fence and when I ran out of planks, leaped into the air. I remember looking down as the bulls passed below me and the fence blew up into splinters.

In my mind, this is what I looked like when I hit the ground. 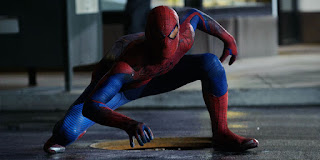 Most likely, what it actually looked like, was this.

Anyways, I have the bulls in a pen. Apparently, there's one other thing that bulls think about, and it's keeping 15 inches of ball sack from freezing, when it's -25 degrees below zero, with the wind chill, outside. But it's only a matter of time before they start thinking about sex. Sex and fighting. I'll be surprised if the fences hold until Christmas.

This week, I'll be joining up with the other Dudes at Dude Write, with this post. I encourage you to pop over and read what the guys bring to the table. You can get there by clicking on THIS LINK 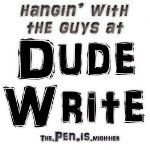 Posted by Ken at 7:32 am
Email ThisBlogThis!Share to TwitterShare to FacebookShare to Pinterest